Vienna-based violinist Orsolya Korcsolan is one of the most versatile classical musicians of her generation. Discovered at the Schleswig-Holstein Music Festival and supported throughout her early carrier by Sir George Solti, praised by TIME magazine journalist Jeremy Caplan, the Juilliard alumna won numerous awards in New York before settling in the heart of the European music world.  Her technical command and warm, compelling sound, combined with her spirit and elegant stage presence, have captured audiences around the word since her debut in New York`s Paul Hall.

Orsolya Korcsolán was born and raised in Budapest, graduated at the Franz Liszt Academy of Music in Budapest, and continued her studies with Sir Solti’s recommendation at The Juilliard School in New York where she studied with the late Dorothy DeLay and Itzhak Perlman and holds a Master of Music Degree.

In the past years she has been working as concertmaster under conductors such as Zubin Mehta, Christoph Eschenbach, and Michael Tilson Thomas and has appeared across Asia in chamber music series with the soloists of the Vienna Philharmonic Orchestra.

An avid advocate of Jewish classical music Ms. Korcsolan serves as traveling ambassador of the Budapest Jewish Summer Festival, one of Europe’s foremost cultural events that attracts over a million visitors from the region each year. She has been representing the festival not only throughout Hungary but also in Austria, Canada and the United States.

Ms Korcsolan is a member of the prestigious New York based ensemble ‘Shir Amy’, Artistic Director of ‘Missing pieces’, a pioneering concerts series presenting silenced composers at the Holocaust Memorial Center in Budapest, and President of the newly established Pro Arte Judaica Foundation.

Orsolya Korcsolán performs on a violin crafted by Johannes Rombach of Vienna in
2004. 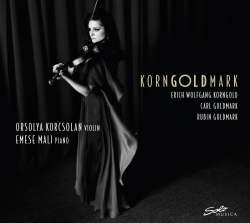 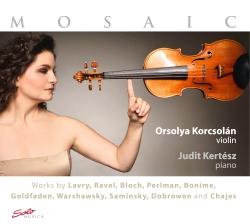